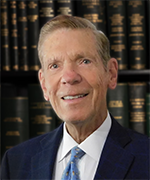 Edward Wedbush is the Founder of Wedbush Securities. From first year revenues of $659, Wedbush has grown to become the largest, full-service financial investment services and investment bank firm headquartered in the western USA serving clients through over 100 registered offices nationwide.

In addition to his tenure at Wedbush Securities, Ed currently serves as a Founding Board Member of the Fink Center for Finance and Investments at the University of California, Los Angeles; and a trustee emeritus of the University of Cincinnati Foundation. He previously served as Chairman of the Board of The Pacific Stock Exchange (1976-1978); Director of the National Securities Clearing Corporation (1979-1982); Board Member of the Great American Bank (1987-1992); Chairman of the NYSE Regional Firms Advisory Committee (1987-1988); and Member of the Securities Industry and Financial Markets Association (formerly Securities Industry Association), Regional Firms Committee (1985-1995), as well as its Board of Directors (1988-1990).

Tell us about your needs.

Tell us about your advisory needs.